Nectar Leaf is committed to advancing the understanding of beneficial properties of natural products. We pride ourselves in bringing to you the highest quality extracts from Coffea (the coffee plant), Mitragyna Speciosa (the kratom tree), and Cannabidiol (CBD) to better you both mentally and physically. We understand that most people seek out background information regarding the products that they use, and we are happy to share.

We stand by every product we sell with a strong customer service and support network to help you through your process of purchasing the right product. We will not sell any products that tests positive for known residual solvents or any toxins or dangerous heavy metals.

We ensure that we source affordable, high quality products from around the globe in a responsible manner.

We use industry standard TLS to secure all communications with our site. You can trust that your payment information is always secure.

Shipping In The United States

Kratom is prohibited in several states, cities, and counties. We are unable to ship to the following states: Alabama, Arkansas, Indiana, Rhode Island, Tennessee, Washington DC, and Wisconsin. We’re also unable to ship to Denver, Colorado and San Diego, California.

Mexico has been an increasing popular location for kratom over the last few years. Kratom and any of its active elements, Mitragynine and 7-hydroxymitragynine, have not been added to any list of controlled substances in Mexico. It is also not considered a regulated substance which means it is completely legal for you to carry and use in Mexico.

While kratom has enjoyed a huge burst of popularity in the United States which has brought on safe manufacturing processes, Mexico is still a relatively new market for this plant. This means that sellers of kratom in Mexico currently do not have any regulations regarding the products they can sell and how it is labeled. This is something you should be careful of when ordering or purchasing any kratom.

You are, however, able to legally purchase kratom in a few places in Mexico although it may be difficult to find. For those who are looking for a safe, tested product, we offer several shipping options to Mexico for your convenience.

According to the CFIA (Canadian Food Inspection Agency) and Health Canada, the two institutions in charge of scheduling substances, Kratom and its components are not considered safe for human consumption. However, it is not constituted as an illegal substance in Canada and can be obtained as “not safe for human consumption” product. Kratom is often sold with this designation to begin with so importing of kratom is not an issue.

A fact that you may (or may not) know is that Coffea and Mitragyna Speciosa are both genera of flowering plants in the Rubiaceae family. A distinction that makes them cousins! The Rubiaceae family, or also commonly known as the madder or coffee family, consists of over 610 genera and 13,150 species of various shrubs (the most common), herbs and trees. It is the fourth largest family of angiosperms (plants that have flowers and produce seeds). The family is present all over the globe, minus polar regions and deserts, but are most commonly found in tropical regions. 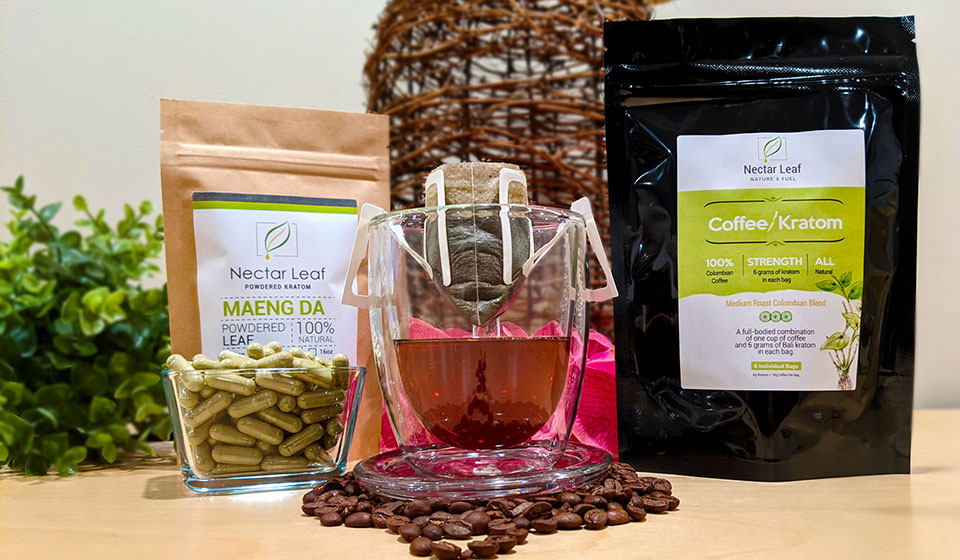 Here at Nectar Leaf, we provide 100% Arabica Colombian coffee. Arabica, or “mountain coffee,” is best grown in elevations ranging roughly from 600-2,200 meters (2,000-7,000ft), just below the frost line. Since our coffee is grown in the mountainous rainforests of Colombia, modern mechanical harvesting is not possible. Therefore, all of our coffee beans are hand picked by local farmers. High elevations also mean less oxygen, which is why Arabica coffee grows slower than it’s Robusta counterpart (the world's second most cultivated coffee plant). However, this increased elevation in turn gives Arabica coffee a denser, smaller, oval shaped bean that contains a more highly concentrated, sweet flavor. Patience truly is a virtue.

Similar to Coffea, Mitragyna speciosa is grown in the tropics and can be found growing naturally in South East Asia. It is indigenious to Indonesia, Thailand, Papua New Guinea, Malaysia, and Myanmar, but can also grow in Central and South America. As you may have deducted, it thrives in environments that are hot and extremely humid. Mitragyna speciosa makes it’s habit in “open savannahs and secondary forests at low elevation (via Useful Tropical Plants Database).” On the island of Borneo, the tree can be found in swamp and riverine forests that periodically flood. It is dominant in colonizing the areas in which it grows. Growing them at home, however, can be quite difficult due to their need for excessive water, and need for rich, fertile soil.

Naturally, Mitragyna speciosa is an evergreen tree, but when cultivated, deciduous. These trees can grow 10-30 meters tall (around 30-100ft) and are 60-100 cm in diameter (around 23-40 inches). The bark itself is grey in color and is smooth to the touch. Their leaves are dark green and have a glossy texture to them with the ability to grow over 20cm long (8in) and 12cm wide (4.7in). At the end of it’s branches is where you’ll find Mitragyna speciosa’s flowers, which appear in clusters of three.

The leaf veins, however, is how kratom obtains it’s different “strains.” Of these 12-17 different pairs of veins on each leaf, their coloration will appear either red, white, or green. Vein color is most directly impacted by geography and human intervention. For instance, impactors such as soil, rainfall, sunlight, and humidity all play important roles in giving kratom it’s defining color, for they impact how fast a tree will grow. White veins, for instance, originate whenever the leaf has not yet reached full maturation. White vein is also dried indoors, void of any sunlight to maintain it’s alkaloidal properties. Red vein leaves, however, have had more time to mature naturally, and then are continually exposed to sunlight after harvesting. Harvest season for the Mitragyna speciosa occurs through late summer through early Autumn. This is done by farmers either picking them themselves or waiting for the leaves to fall off.

CBD is legal throughout the United States in all 50 states as long as it is sourced from hemp grown outside the US and contains no THC D-9. We ensure this by only using the hemp fiber, stems, and seeds rather than the flowers.

Our technique for acquiring CBD allows us to sell it as a hemp food product, meaning its available to families wherever they live. We take care to ensure that each of our products has a consistent amount of CBD, eliminating the need for guesswork and variations between doses.

Explore all of our products today!

We are currently accepting eChecks and cryptocurrency. Use discount code nectar10 for 10% off your first order at checkout! Dismiss